Rubies have been prized above other stones for thousands of year, across various ancient cultures.  Ruby stimulates deep understanding and attainment of the heart's wishes.  It also provides a very strong shield of protection for the mind. 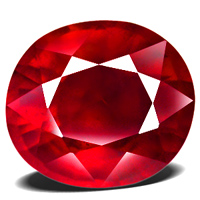 Ruby (Manik) is the gemstone of planet Sun (Surya), the strongest planet in the solar system. The Sun rules our physical health and vitality and determines our self of ego and self-projection in the world. A strong Sun makes a person very energetic and the center of attention.

The energetic Sun, if well placed in a horoscope, gives reputation and dignified position to the native. Strong and robust physical structure, stern skeleton, strong will-power and self-dependence are the boons of the Sun. Sun creates interest and enhances attraction of the native towards golden/gold-made ornaments, red colored attire, chilly & spicy dishes, leadership and governance or administration.

With rising of the Sun God. The source of life, the entire world and all the creatures on earth return to life. They are engaged in their work during day hours and at sunset, all the living creatures throw themselves in the lap of slumber, after day long toil. It indicates that it is the sun, with whose rise in the morning all the activities on earth get activated whereas everything gets halted at the sunset. King of all the planets-significance/grahas the Sun, in Vedic astrology, is called Ravi. The sun rules the sign of Leo. The sun occupies the most prominent place in the Zodiac. All the planets, stars and signs rotate around the Sun. The Sun is known as ';Atmakarak Ravi'. This comes from the Sanskrit word ';Atma' meaning ';soul' and ';karak' meaning ';indicator'. Therefore as ';indicator of the soul', the sun is life.

Folklore and Mythology of Ruby Ruby was said to symbolize one's rise from martyrdom, helping people release suffering.  In ancient cultures it was used in "casting" to predict the future and aid in deceision making.  Ruby was traditionally carried to protect against lightening and bad dreams.  Hindus beleived ruby to be the king of all gemstones.  It was said that there was a light and a heat inside the ruby that could not be conceiled and would even show through clothing.  If dropped into the water, its energy would be transferred and make the water boil.  In the Christian Bible it is said that Christ requested that Aaron wear a ruby around his neck for protection.

Healing Properties of Ruby Ruby has been useful in the treatment of fever and heart disease.  It can aid the foriming of the enbryo in pregnancy and counteract stimulants such as coffee, drugs or other toxins.