General Characteristics of Mercury: Maternal Uncle, Intelligence, Logic, Mathematics, Humor, Speech, Skin, Nervous system, Green color,  Emerald and North. Emerald is known as "the stone of successful love," providing sensitivity and loyalty to its wearers.  The symbology and meaning of emerald is also one of mental discernment, giving the ability to make a "right" choice.  It brings harmony, action and progress.

Emerald Folklore and Mythology: Emeralds have been sacred and prized for over 4000 years.  They were used by priests and rulers of both Ancient Egypt and Greece. It was beleived to aid in eloquent speaking and in seeing the truth despite clouded emotions.   Emerald was one of the stones in the breastplate of the High Priest in the Christian Bible.

There was also a beleif that Emeralds were sensitive to sexual energy, as relayed in this legend : the Hungarian King Bela, who owned a very valuable emerald ring experienced that when he reached to embrace his new wife, his emerald broke into 3 pieces.  Emerald was also one of the stones supposedly given to King Soloman which gave him "power over the all creation" 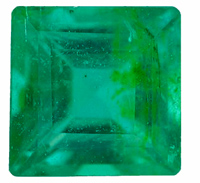 Emerald is the birthstone of May.

Healing Properties of Emerald: Emerald is beneficial in healing the heart, lungs, muscular system and spine.  It can also be used to soothe the eyes.